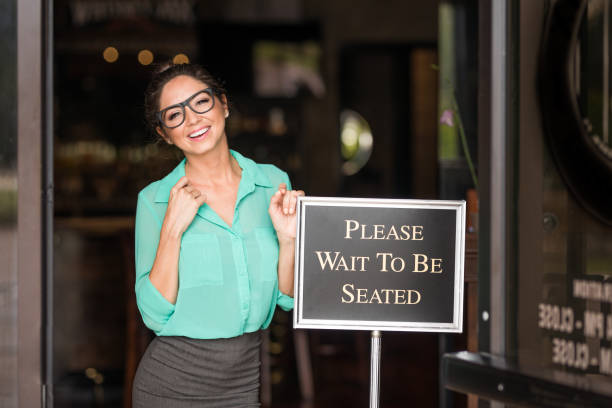 The reception counter was large enough for three or four greeters to stand behind it in wait. There was only one.

And she was scowling

I was with two friends as we approached the Greeter at the neighborhood restaurant. The mere size of the desk, staged as an enormous barrier between would-be patrons and the promised land should have served as a clue.

The Greeter spoke one word: “Hello.”

We were, however, on a mission, and undeterred. So once it was clear that making progress would be up to us, we boldly requested a table for three.

With a tone that said she’d rather be almost anywhere else, she mumbled an inaudible response (and I have good ears!). But, as I mentioned, we were committed. So I apologized and indicated that I had not understood her instructions.

With what came across as measured disgust, she queried in snarled tone, “name?”  I interpreted her tone to suggest that I had offended her sensibilities, and was interrupting a practiced rhythm that should already have her tending to the interlopers next in her line.

To be fair, once we were shown to our table the rest of the evening was pleasant enough. Food, refreshment, and conversation served to overshadow first impressions. For the moment.

But the experience lingers.

And in a highly competitive hospitality market that offers easy access to dozens of alternatives, here’s the problem: the in-real-life message of the sergeant-at-arms posing as restaurant greeter was so poignant that it dominates any other aspect of the experience, and any messaging attempted by the restaurant.

What the neighborhood restaurant has yet to learn is that the Greeter is a member of the restaurant’s Marketing and Sales team.

This is not news. No great insight. But without respect to industry, the enterprise that still views Marketing, Sales, and Customer Service as silos that operate independently is ignoring reality and missing opportunity.

“In a marketplace characterized by competition and rapid change, the smart organization understands that each opportunity to deliver an experience to clients/customers/prospects is far too valuable to trust to chance…much less, ignore.”

Add the impact of word-of-mouth and social media, and the message should be clear — the experience you deliver may be the most important marketing you do.

Anyone doubting this reality may be entertained by the infamous United Breaks Guitars saga of the late 90’s.

I Can’t Hear What You Say

It might be truer today than ever — talk (read conventional marketing messaging) is cheap.

Any business looking for the shortest route to measurable impact is devoting at least as much time to the first-touch experience delivered as it is to the siren song of a viral incident.

Do less, and be prepared for an emphatic response from the marketplace: “what you do speaks so loud I can’t hear what you say.”

Eric Fletcher is a 30-year veteran of advertising and marketing. A former ad agency partner and CMO, he has worked with local, national and global B-to-B and B-to-C clients. Today his consultancy helps professional service leaders design and build strategies for growth.  View all posts by Eric Fletcher