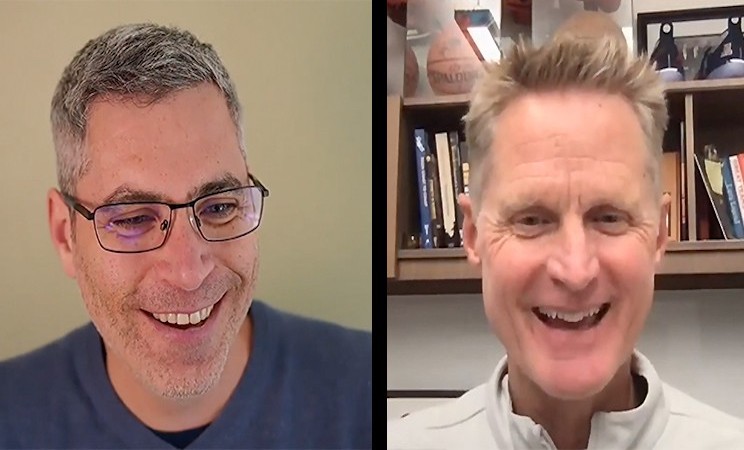 I recently had the opportunity to interview Golden State Warriors coach Steve Kerr (check out the video here). While he probably needs no introduction, it might be useful to note that between winning championships while playing for Michael Jordan’s Chicago Bulls (three titles) and Tim Duncan’s San Antonio Spurs (two titles), and then coaching the Warriors to three NBA titles, Steve has earned a total of eight championship rings.

So he knows just a little bit about winning, and about leading teams in ultra-competitive environments. Here are a handful of management lessons he shared with me that I’d like to pass along.

How to identify passion in potential hires

One of the hardest things for any leader is figuring out whether a job candidate has the passion required to go all-out — to not just care about, but be obsessed about winning. Steve said he asks indirect questions to get at how much people really care about basketball because, in his context, players who are truly passionate about the game are interested not just in their own skills, but in the game itself.

“I think you can do it in a relatively mild-mannered way, just almost like you’re just kind of checking in and, ‘Hey, what are your hobbies? What are your habits? What do you like to do?’ … I had a guy years ago preparing for the draft. I said, ‘Have you watched the playoffs?’ He said, ‘No, I don’t really watch basketball.’ I was like, ‘Okay, we’re not taking him.’ That was easy.”

How to help powerful personalities jell together

One thing of interest to me is how you manage powerful personalities, all of whom are driven to win but aren’t necessarily easy to get along with or accepting of other styles. Steve said that certain things are non-negotiable, like being on time for practice or playing with a certain level of focus, energy, and effort.

“If you do get that, then you have to help all the players understand that there’s different ways that you can get to this goal. And as long as you’re bringing effort and energy, you’re going to take different ideas. We’re going to collaborate. We are going to figure out the best way going forward, and we’re really going to celebrate each other’s uniqueness. And so that’s something we really try to do is celebrate the individual within this context of, ‘This is what we’re about. This is our goal. This is how we operate. And you are very unique, so you bring what you bring to this group that’s trying to accomplish this goal.’”

How to know when it’s time to change management tactics…

When I’m unable to solve a particular problem, and especially if I’m confronted with the same type of problem again and again, I ask myself whether I need to reevaluate how I go about solving it. Steve said it’s a matter of balancing your basic principles and new or individual circumstances.

“It’s a very fine line between going away from your values and your principles and trying a different tack. And you got to find the balance. I think what you have to do as the leader, I know for me as a coach, again, there are some non-negotiables. And if you’re talking about basketball, specific certain things that I will always believe in my heart you have to do to win a basketball game. And there’s no way we’re going to go away from those things… I think you got to remember who you are and there’s some things that you can’t compromise on, but you can’t be afraid to expand your horizons a little bit, too. And wherever that balance is, that’s the answer.”

… and how much to rely on analytics versus instincts

The same is true for knowing when to lean on data, versus your experience and your intuition or gut. In basketball, teams are increasingly relying on analytics to encourage players to take certain types of shots and to pass up (literally) others. Steve said that it’s, again, a matter of finding the right balance so that players have the information they need, but the freedom to improvise.

“Like everything we’re talking about, Ariel, it’s finding the sweet spot, finding the balance. And because I think everything that I’ve seen is middle ground. My mom used to say, ‘Everything in moderation.’ That’s kind of an age-old parental piece of wisdom. Anything in moderation is fine. And I find when you’re on the extreme and one under the other, that’s where you can get into some trouble. And we’re constantly searching for that balance between analytics and human psychology and confidence and finding where that sweet spot meets.”

A bit of humility goes a long way

One of the questions I think many leaders wrestle with is how to lead when you’re new to an organization, whether through an internal move or as a new hire. Steve said that people should resist the urge to immediately try to prove themselves to their new teams, but rather to show humility and a willingness to listen and collaborate.

“Your expertise and your knowledge will show as time goes by and as you have more interactions and you’re able to share ideas. But coming in with humility and really establishing that it’s a collaboration, that what you’re doing is really just putting your heads together and trying to come up with the best way to move forward is, in a sort of a strange way, it’s the most powerful force that I’ve seen in my days, both as a player, feeling that from the coach and as a coach, sort of watching my players.”

I’d love to know what you think about these issues, and I hope you’ll share your experiences in the comments section. You can watch some of my conversation with Steve here.

I’ve built my career helping innovative companies communicate in a way that simultaneously delights customers and drives business results. Now more than ever, authentic conversation with customers is central to every marketer’s strategy. No one wants to feel like a target, and no one wants to be marketed to. Instead, brands need to listen to their customers and deliver experiences that are important, timely, relevant and empathetic. When I’m not focused on leading the marketing strategy for Oracle, I spend time rooting for my hometown teams – the 49ers, Giants, and Golden State Warriors. View all posts by Ariel Kelman